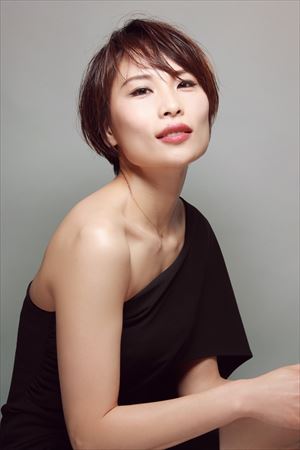 Born in 1982 in Kyoto, Japan. Currently living in Tokyo.

In 2002, she began working as a sales rep. for a Kimono fabric and design store.  Wanting to show pure gratitude towards the customers, she came up with the idea of writing “thank-you letters” by hand using a brush pen.  This simple action touched the hearts of many of her customers, and she quickly became the top sales rep in 6 months.  Thereafter, in order to fully understand her own feelings and to express them outwards, she innovated her original calligraphy style called “SINSHO”, which means “Calligraphy of Heart”.  She started her own company in 2008 and provided her artwork to more than 20,000 customers world-wide in the past 13 years.  With the hope of helping others express their feelings and live their own way, she also started providing “SINSHO” Seminars.

In 2013, she established “SINSHO Association” to expand the SINSHO method nationwide as a self-expression tool, focusing on training other instructors online. In 2018, she expanded her activities overseas in earnest and devotion to the production of calligraphy artwork using her own body as a canvas.  Through her performance, she received praises from the media such as “her appearance of writing her works is novel and beautiful,” and “unique and exciting view of the world” and have attracted a great deal of attention and offers from all over the world.

Her honest and unadorned personality attracts wide range of fans, as well as collaboration requests from artists and musicians from all over the globe. In her private life, she is a wife to a cheerful husband and a mother of two children.  She loves watching her children’s videos in between her work and her favorite food is Japanese sweets.
Instagram-main
Instagram-art
Youtube